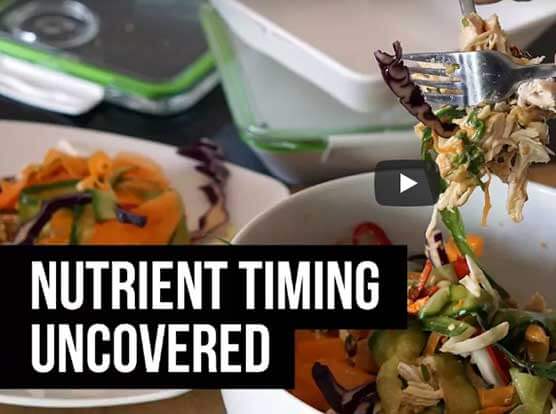 What is nutrient timing?

Consuming the right nutrients is incredibly important for meeting your health and fitness goals.  Not eating the right balance of nutrients can lead to fat gain, muscle loss and reduced athletic performance.

Nutrient timing has been a hot topic for a number of years.  The general consensus used to be:

Eat low carb meals the rest of the time[1].

This was based on a solid theory.  Protein prevents muscle breakdown, and carbohydrates replenish your glycogen stores, which are depleted during workouts.  Getting a good dose of carbs and protein after a workout should help you recover more quickly, and boost muscle synthesis right when your body is working its hardest to rebuild your muscles.

However, this was based on some limited science.

Firstly, they didn’t consider final outcomes.  What I mean by this, is things you actually are aiming for, such as improved performance, fat loss, or muscle gain.  The studies instead were primarily concerned with protein synthesis rates and glycogen replenishment rates.  It’s a nice theory that these will lead to improved performance and body composition, but there’s no guarantee they do.

Secondly, they were short studies.  What’s most important, is what happens in the long term.

So, what have we learned in recent years?

Well, studies have shown that if you don’t consume carbs after working out, but instead just eat carbs throughout the day, you will replenish glycogen stores in about 24 hours.  If you consume carbs right after workout, glycogen replacement will be faster[2].

This means that if you exercise more than once a day, consuming carbs right after exercise is beneficial.

But if you exercise hard no more than once a day, it doesn’t matter much when you eat.

For years the prevailing wisdom was that you had to drink a protein shake as soon as you finished a workout to get maximum benefit.

However, a growing amount of evidence suggests that this simply isn’t the case.

A large analysis carried out in 2013 went looking for all studies conducted to date which were investigating just how important timing was for muscle hypertrophy and strength improvements.  They found that, on average, there was no relationship[6].

However, there is a time when the old advice of eating a big pile of carbs and protein right after a workout does apply.  In a massive review of all the evidence, published in the Journal of the International Society of Sports Nutrition, the authors came to the conclusion that if you haven’t eaten for 3-4 hours before working out, your body enters a catabolic where muscle synthesis is reduced.  In these circumstances, a large protein shake after a workout is an excellent idea to push your body into an anabolic or muscle building state[7].

When should you eat your daily calories?

There have been studies that have shown that eating more meals a day tends to correlate with obesity[11].  However, this is simply because people who eat more meals tend to eat more food in general.  If you eat the same number of calories spread out over more meals, it makes no difference.

Another common belief is that eating just before going to bed can lead to gaining body fat.

This idea has stuck around as it seems to be true that people who eat more in the evening are in general less healthy.  However, people that eat late tend to eat more food overall, and eat less healthily[12][13].  When total calorie consumption and food quality is accounted for, the evening effect disappears.

Eating regular meals does help stave off hunger and prevent you from making poor food choices.  One study showed that skipping breakfast meant that participants were more hungry during the day, so snacked on unhealthy food and ended up eating more calories[3].

If you find yourself snacking on sweets and unhealthy snacks throughout the day, consider eating regular meals of wholesome, non-calorie dense foods, like green vegetables instead.

There is another option for when to eat your daily calories.  This is a technique known as intermittent fasting.

There are two types of intermittent fasting:

Or skip eating entirely for two 24 hour periods each week.

Intermittent fasting has been shown to result in an improvement in body composition for many people[4.1][4.2].

The reasons why this works is a little unclear at present, as not much research has been done on the topic.

It has been shown that restricting your eating to a window of 8 hours a day has significant positive effects on some health-related hormones[6], which may aid body composition.

It is also likely that restricting you eating to a short window simply means you eat fewer calories.

It has also been shown that if you exercise when fasted, you burn fat more readily than someone who has eaten recently[5].  This suggests that if you fast, your body goes into a fat burning state, making it easier to burn fat.  The jury is still out on this effect though, as some studies have shown no effect on overall body fat[10].

When should you eat for improved athletic performance?

If you’re looking to get that extra boost of energy during a workout or a race, is it best to eat just before exercising, or several hours before?

You would expect there to be the ideal time before exercise to get your calories.  But surprisingly, studies have shown that for exercise lasting less than an hour, so long as you eat adequate calories at some point during the day, it doesn’t seem to matter much when you eat them[1].

However, where timing does become important is when preparing for a workout or race of longer than 90 minutes.  If you’re planning on running or cycling at moderate to high intensity for more than an hour and a half, carb loading can improve performance and push back the onset of fatigue[3].

Over the course of 90 minutes, your body can simply run out of energy.  Carb loading is where you consume an elevated level of carbohydrates in the days approaching an event, to increase your energy stores.  This has been shown to improve performance[4][5].

To get the maximum benefit, you need to eat carbohydrates with a low glycemic index such as pasta and grains in the days running up to the event, then switch to faster burning carbs such as sugars in the hours before the race.

Nutrient timing is important for some people, especially athletes, people who exercise multiple times a day or for over 2 hours at a time.  For these people, getting a decent amount of calories in the form of carbs and protein can improve performance and aid recovery.

If you’ve just done a hard workout, you don’t have to have a massive meal right away, unless you haven’t eaten for 3-4 hours prior to working out.  If this is the case, try to eat something as soon as possible, as this will help muscle synthesis.

If you’re trying to lose fat, consider trying intermittent fasting.  It doesn’t work for everyone, but it has been revolutionary for others.

For most people, nutrient timing is not a significantly important issue.  It’s much more important to pay attention to what you eat, and how much you eat, rather than when you eat.