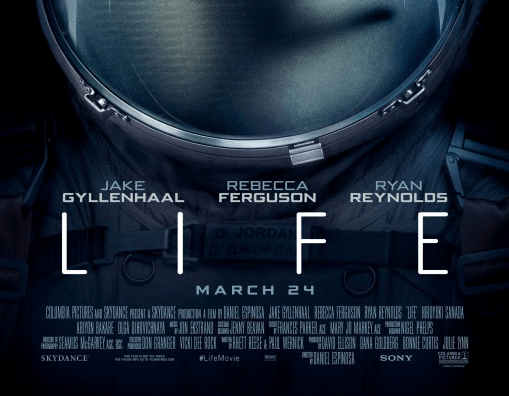 I had the pleasure of going to the cast and crew screening of Life at the weekend. It’s the first film I have worked on in a while where I managed to get to a screening, the past few I have seemed to be away on locations with other jobs.

Life was a great project to be part of and I have to say probably the most I have enjoyed a project in all my years training actors for films.

The demands of the film where very unique, the focus was on performance rather than aesthetics, which made a nice change for me.

The film being set in space meant the actors spent large portions of the day on wires to simulate zero gravity. The stress and fatigue that sets in after long periods of flying is pretty intense.

The cast where a pleasure to work with, and I can proudly add some more big names to my C.V.

Working with Ryan Reynolds has always been a bit of a goal for me, I think his shape in Blade is one of the highlights of the male physique in films. I hope to work with him again in the future and help him take that shape to the next level.

The film itself I thought was great, I obviously knew what was going to happen as I had read the script all those months ago. It’s a pretty intense film, but I do like a good horror!

Writing all those names I forgot I trained so many people for one job!

Great cast and crew and look forward to working with them again in the future.

And most importantly thanks to Guy, who’s amazing chefs provided me with ridiculously good food for the shoot!!!!!

← CHEAT DAYS VERSUS REFEEDS HOW TO ATTAIN A TONED LOOK, LIKE A HOLLYWOOD LEADING LADY →