WHAT BODY TYPE AM I? 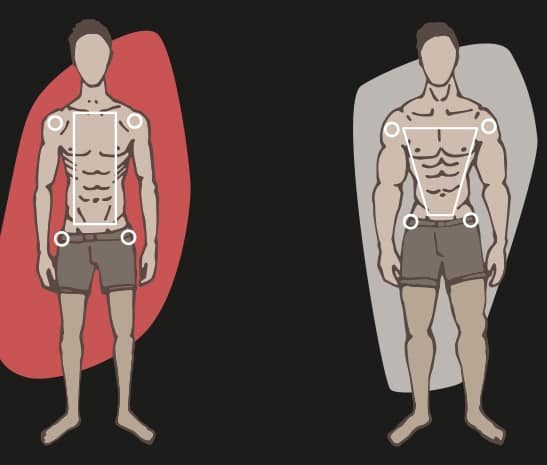 If I were to ask you what kind of body type you have, would you be able to answer? The human body comes in all shapes and sizes throughout the world, but whilst there are billions of us sharing the planet, we have been categorised into three different body types.

Our genetics/hormones do play a pretty major role in our body type, athletic potential and muscle building capabilities.

But I’m afraid you can put it all down to genetics. Your body type is also massively influenced by your lifestyle, exercise levels, stress, nutrition and sleep quality. These factors can change your body and push you away from your genetic bodytype. These changes don’t happen quickly but over many years.

Whilst lifestyle does matter, it potentially should be your focus (as you have the most control of it) we also have to be aware that you may fall into one of these categorie.

These types aren’t written in stone however, people will often share characteristics of one, or more, types at the same time, but they are important to understand how your diet can affect you, depending which one you are. By defining what body type you have, it’s vital to know how best to eat for each one.

These techniques will not only apply to helping you from a bodytype stand point but also the lifestyle issues we have looked at that could be pushing you the wrong way.

Over the next two blogs, we’re going to look at these three types and how you can optimise your diet to complement the body type you have. Let’s start with the three body types and how they react to your exercise and nutritional routines.

When it comes to body type, American psychologist William Sheldon popularised the following three body types back in the 1940s. He theorised we would all fall into one of these types:

Obviously, it’s difficult to pigeon-hole a third of the population into any of these three body types, but that’s not to say it isn’t possible.

How do you know if you’re an ectomorph? Well, if you’ve got the build of an endurance runner, someone who’s lean but short on muscle, then you’re probably an ectomorph.

Ectomorph’s tend to stay lean despite hours of workouts in the gym. They tend to be good at processing carbohydrates into energy and often have a fast metabolism, which means they burn off fat quite easily. The flip-side of that is that they find it a struggle to bulk up, often because their fast-twitch fibres are under-developed.

The biological state of an ectomorph is all to do with something called ‘satellite cell-mediated myonuclear addition’. Which, in basic terms, means the number of cells surrounding your muscle fibres and the ability to add more through training.

If you’re an ectomorph and want to build muscle, then I would recommend the need to keep cardio sessions to a minimum. Instead, you should focus on intense workouts using compound exercises to maximise your release of growth hormone.

On top of that, I would also keep your calorie intake quite high, up to around 3000 per day which would include plenty of starch carbs and whey protein. You can get this from supplements if needed. If you’re an ectomorph, I would make the deadlift your new favourite exercise for packing on mass. You will have to work harder on the weights to get a toned physique, something that other body types find easier to achieve.

The second type we’re going to look at are endomorphs. Those people with this type of body often have the hardest time when it comes to managing weight and fitness overall. They are very good at storing fuel, with muscle and fat tending to concentrate in the lower half of the body. Sometimes known as ‘pear-shaped’.

If you’ve always had problems shifting troublesome fat, then chances are you’re an endomorph. Endomorphs tend to have a relatively high amount of stored fat, a wide waist band and a larger bone structure. It might sound like endomorphs have the thin end of the evolutionary wedge, but there’s a reason for it.

In times past, when food was scarce, natural selection pinned its colours to those people with fat-storing metabolisms, aka endomorphs. That might have been fine when food was hard to come by, but in these days of fast food restaurants and almost limitless options, it can come back and bite your fitness regime on the butt! Before you give up all hope, let me give you some help.

If you’re an endomorph, your exercise regime should focus on aerobic exercise and resistance training to remove fat. Weight training works because it will continue to burn calories long after you’ve finished your routine. In addition, any calories you take in during the recovery period will help your muscles to grow, rather than just replenishing your waistline. Concentrate on training with intensity, building your shoulders and keep an eye on your carb intake and you’ll be doing well.

The final body type we’re going to look at is the mesomorph. Of the three we’ve looked at, mesomorphs find it easiest to add new muscle and often don’t store too much body fat.

If you’re a naturally athletic build, then you will probably be a mesomorph. It might sound like they have the perfect body type, but they can often take their athletic shape for granted and tend not to focus as much as others, which can result in a scattershot approach to training and nutrition. If you know someone who looks like they workout a lot without actually setting foot in the gym, then they’ll probably be a mesomorph.

Mesomorph tend to be the alternative side of the biological coin from our friends, the ectomorphs. In studies, mesomorphs often are the top of the list when it comes to spikes in the regulation of myogenin, the key gene associated with muscle growth.

As far as training goes, mesomorphs should train athletically, meaning a combination of sprints, box / vertical jumps and other plyometric exercises. They should also concentrate on low rep power moves to help keep their metabolism high and keep the fat away. It also works well to combine power moves with strength moves, especially ones that work the same muscle groups.

We’ll cover the foods each body type should be eating much more in my next post, but in addition to nutrition, mesomorph tend to respond well to creatine.

Now we’ve looked at each of the three body types, next time we’re going to look at the foods you should be eating (or not eating) to make the most of each type. Until next time!