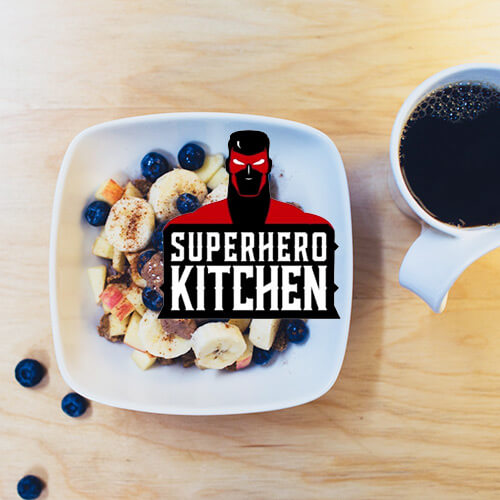 I am super excited to presenting this, it’s something I have wanted to do for such a long time. I love to cook, I love to eat and to get the opportunity to make a series with Mikey was just incredible. I hope you enjoy it as much as we did making it!!

Over the series we will be running information on a number of hot nutrition topics and also running through a selection of different meals for different goals.

Feel free to ask your food and health related questions and we will do our best to cover them in the up and coming episodes.

David is a personal trainer based at Pinewood Film Studios, he is best known for his work with Jennifer Lawrence and Hugh Jackman.

Mike Johnstone has cooked for the likes of Brad Pitt, Angelina Jolie and Chris Hemsworth to name just a few.

Breakfast – The most important meal of the day!

We have been raised to believe breakfast is the most important meal of day. I don’t disagree with this.

Timing of breakfast is often the main cause for conversation. The truth is what you have is even more important than when you have it.

The common belief is that eating breakfast will give your metabolism a boost and that not eating will mean that it slows dramatically. It’s true to say that the calories you intake will affect your metabolism (and your energy), but it’s the composition of the calorie; whether it’s protein, carbohydrate or fat, is what really impacts your metabolism. Eating the wrong food can be just as harmful as not eating at all. Saying that, if you fast for too long then your body will go into ‘protection mode’ and will begin to store calories as it slows down. This can also have the negative effect of using the glucose stored in your muscles as an alternative food source.

As I said, many of us are brought up to believe that missing breakfast is a big no-no, but that isn’t believed by all nutritionists. In fact some argue that the metabolic benefits of breakfast have been greatly exaggerated by the mainstream media, particularly in adults. She believes that the link between missing breakfast and weight gain, the more popularly-held belief, is purely behavioural rather than a scientifically proven reaction to not eating breakfast. We are not predisposed to reach for a donut just because we didn’t eat breakfast.